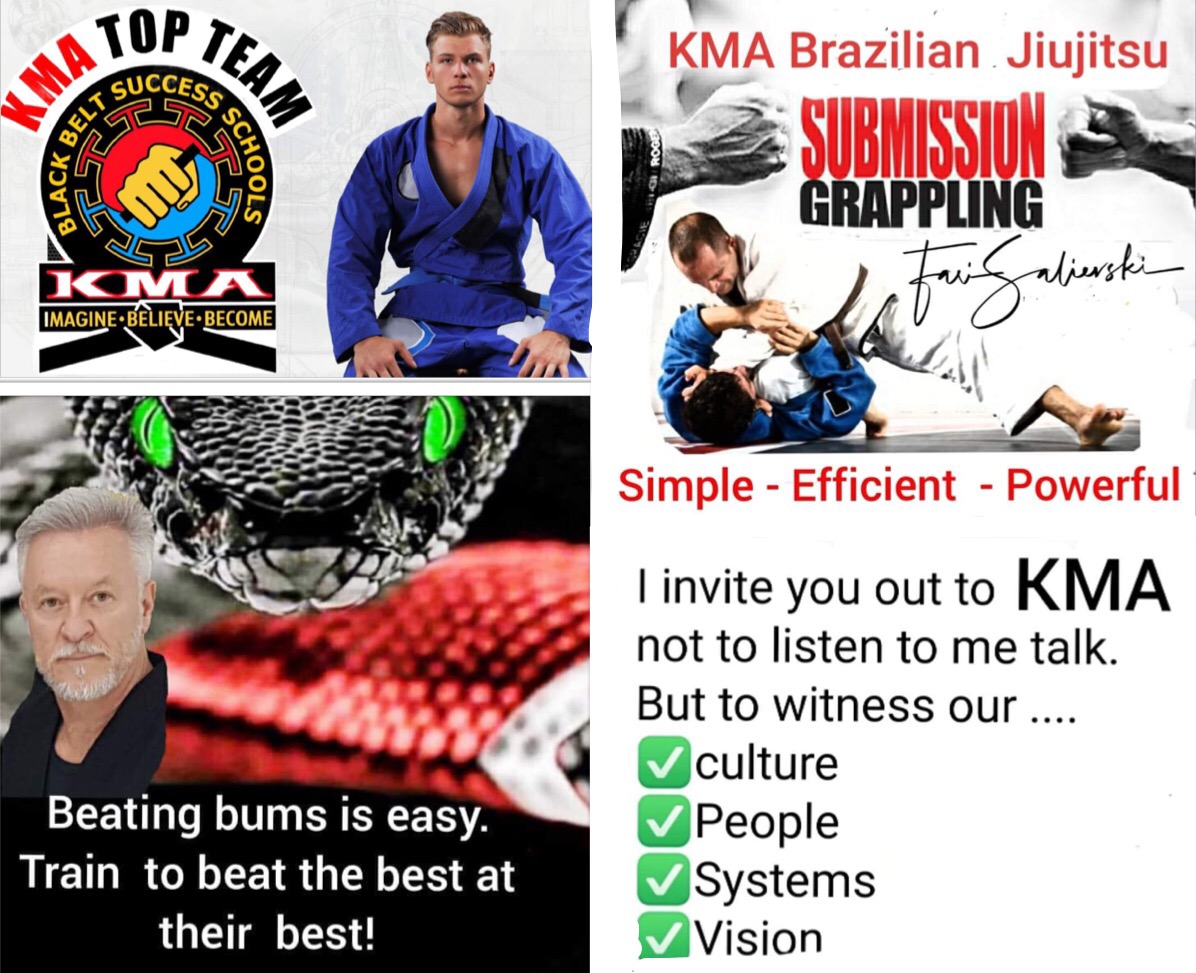 Master Fari was in the corner and with only 2 weeks notice whilst at KMA faught in the UFC. Brian Ebersole not only debut in the UFC from here, he won Fight of the night & then did it again on his 2nd fight! Master minded Martin Nguyen's career to 2 weight division champion, 3 titles and a 2018 fighter of the year award. Theo Christakos  4 time Australian champion & is on the cusp of a UFC debut hopefully in 2020! All this on top of guiding Corey Nelson to all but 1 of his titles and Shabe Kafo with Australia's first ever twister finish in the UFC.... such amazing history & consistently producing amazing results.

Champions Train Here - KMA Top Team
A long history & culture of inspiring champions in life and in the competitive fight arena. Check out our most recent clip ;  https://www.youtube.com/watch?v=XVE3P4CsJ6c&feature=share

Our philosophy of BJJ self defence is simple: if attacked, you will need to finish the situation as quickly as possible. We train you how to understand punches, kicks, how to close the distance & work from the clinch or on the ground. Our classes are designed for those who want to learn effective self-defence for personal safety, competition , cage fighting or simply as an exciting way to stay fit & healthy.

Brazilian Jiu-Jitsu Combatives form an integral part of our Pro MMA™ system & is an art that heavily emphasizes ground grappling. The goal of BJJ Combatives is to get a submission (a joint lock or a choke), or a dominant position where you can strike or just tie the attacker up where they cannot hurt you!

BJJ is very much an art that is designed for a smaller person to neutralise a larger and stronger attacker through strategy and technique.

Our BJJ aims is to be combative rather than tournament orientated and so unlike most Brazilian Jiujitsu schools KMA offers classes that are very streetwise effective as well as tournament specific. BJJ Combatives is all about making sure the technique works anywhere and anytime be it for MMA, Self Defence or for tournaments!

Note: Before you join any BJJ school you need to ask yourself are you after tournament only training or you also want "punch & kick" self defence"?  Only KMA offers both!

Furthermore there are many schools that even promote rank based on tournament participation, not at KMA. We feel sport belt holders are very comfortable in sport jiu-jitsu matches and controlled sparring sessions. However, when confronted by a larger and more athletic opponent who doesn’t play by the rules, they are more often than not often shaken by the unpredictable, violent attack and find themselves unable to respond as their training did not prepare them.

Personal self defence is our goal and is in fact the measure of proficiency in our system. Being street ready will also make you competition ready, not vice versa.

KMA Brazilian Jiu-Jitsu is proud to have national & international affiliations providing an amazing source of knowledge & worldwide training opportunities.KMA is the longest established BJJ school in Liverpool & was the first to introduce MMA to the area. Combined with teaching that began in 1982 makes finding the right school easy.

Mixed Martial Arts - Pro MMA™ Champions In Training
To be the best, you have to train with the best. Master Fari is Liverpool's (& Sydney's) only MMA Certified trainer with the hugely successful, American Top Team(2010).KMA offers wrestling ,No Gi & Boxing  & specialised conditioning classes all designed to bring out your best  forming  an integral part of our KMA success formula.